Byblos Can't Get Enough of the CFF!

Cabriolet Film Festival is getting ready for Byblos for the 4th year in a row!

Having become a tradition now, this edition takes place in the beautiful setting of the Roman Alley of Byblos during two days, in partnership with the municipality of Jbail. Unlike Gemmayzeh's Cabriolet, this one is theme free which means you will get to watch the most diversified set of short films from around the world, with a major presence of Italian and Swiss films and an upgrade in quality when it comes to local short films.

In this 4th edition which is scheduled on the 9th and 10th of August 2017, the collaborations with international festivals and local directors has evolved once more, which has made the selection more difficult but mostly, more exciting! Fiction, documentary, animation and experimental films are all on the list, for the feast of your eyes and projected on a huge 12 meter wide screen. Brahim Samaha, founder of the CFF, is looking forward to the crowd's feedback as some films will make them laugh, some will reach their hearts and some will surprise them!

To go along with the TVC developed for Gemmayzeh's edition this year, Laboratoire d’Art came up with yet another fresh and summery concept for Byblos, which was applied on the printed material as well as the video commercial.

Of course, all of this would not be possible without the much valuable academic partnership of Université Antonine and more specifically: Kevin Saad who supervised the creation process, Germain Abi Khalil who created the animation and Jean Paul Jalwan who composed its customised music. Everything related to social media is handled by Attitude agency, whose owner and creator is Mrs. Antoine Bou Gebrael, also an instructor at UA.

This year doesn't come without a special surprise: a new logo especially designed for the Byblos edition. The process was monitored by Daisy Boujawdeh, Head of the Graphic Design and Advertising departments at UA, and executed by three of her students:Chloe Chidiac, Elise Kassis and Stephanie Saadeh. The new logo recreates the skyline of the ancient and charming city of Byblos, just like the original CFF logo represents Beirut's skyline.

The team looks forward to meeting you under the stars next week for two unforgettable nights! 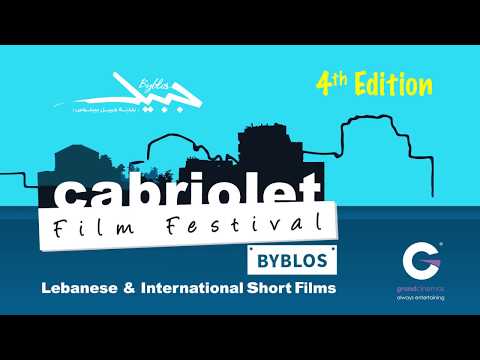